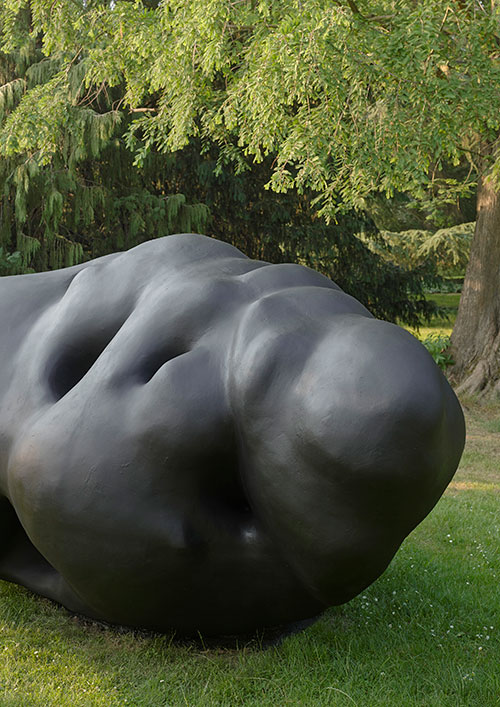 You can watch the trailer for the handover of the sculpture on YouTube. 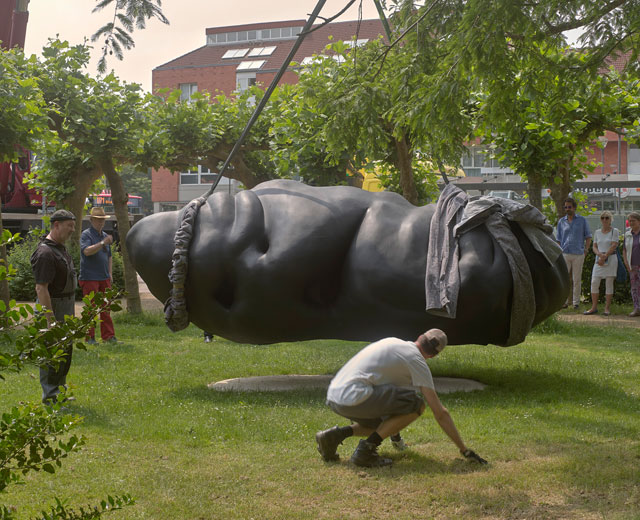 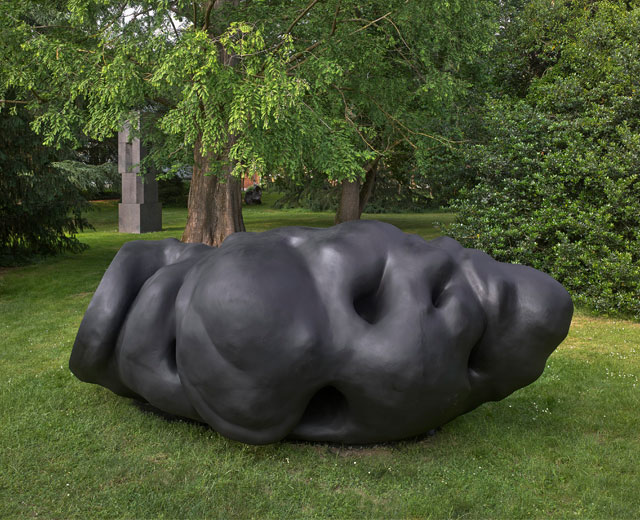 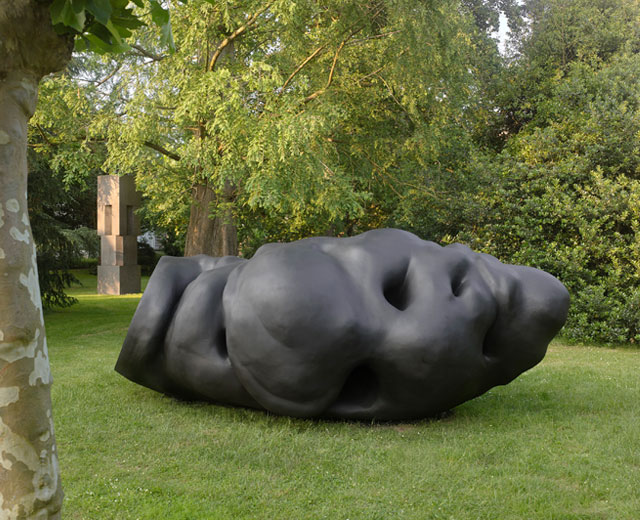 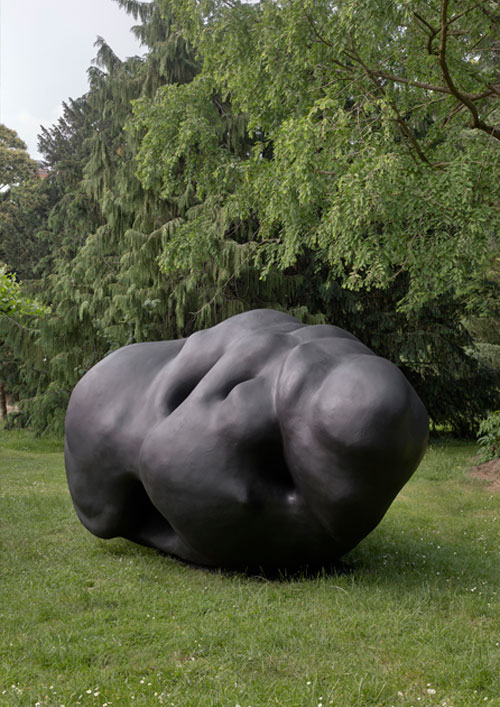 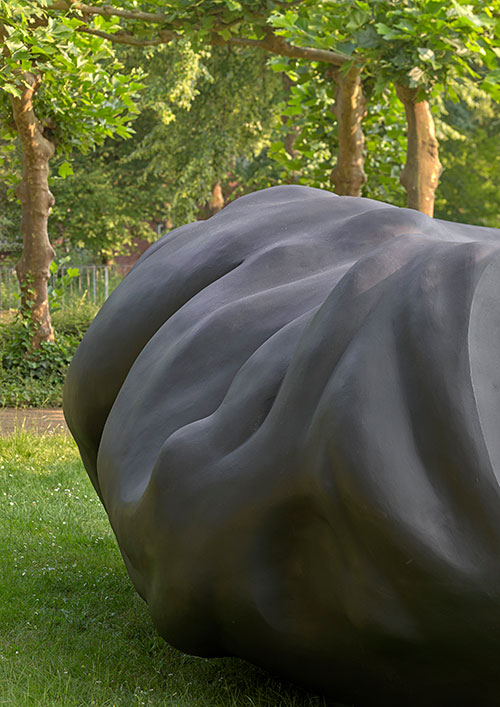 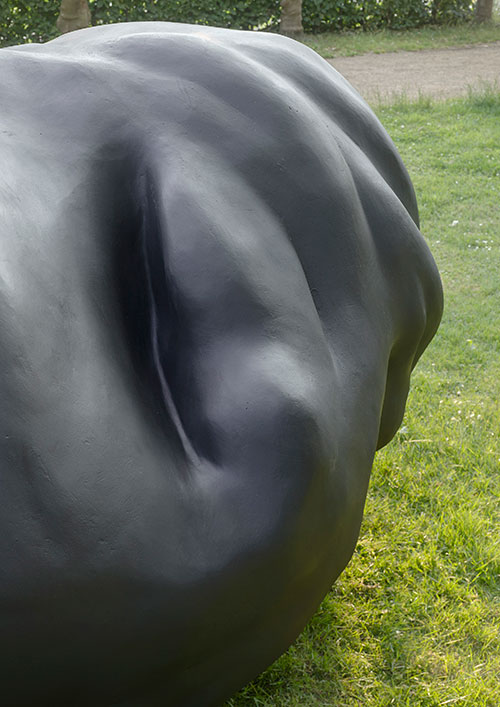 Gereon Krebber's Zirbel is primarily a freely conceived sculpture. It is an abstract form without any similarity to an identifiable real object. It is an autonomous, self-justified work that makes a particular impression on the viewer through its sculptural characteristics. The structured black exterior, its outwardly swelling bulges and deep inward hollows, along with the weighty stolidity of its reclining position, give an idea of forces impacting its formation from within and without. And so there is an atmosphere of the unknown and alien around Zirbel, full of mystery and idiosyncrasy, that both repels and attracts and provokes curiosity. The sculpture is contradictory, heterogeneous and antagonistic in its overall structure. But it is precisely through these apparently contradictory expressive aspects that it obtains its singularity, dominance, allure and originality.

Krebber took the opportunity to tie his work excitingly into its surroundings. One of his main motivations was to place his Zirbel in direct contact with Anthongy Cragg's Articulated Column (1996) and Erwin Heerich's Monument (1989). But other sculptures in the park - such as Wang Du's China Daily (2010) or Günter Haese's Optimus II (2007) - and the immediate architectural and horticultural situation have close connections to Zirbel in both form and content.

It was certainly with a smile that the artist named the sculpture Zirbel, tonally similar to the German title - Wirbel-säule ('spine') - of the nearby work by his teacher Anthony Cragg. Parallel to this, and this speaks for Krebber's ingenious combinations of meaning in his titles, the name refers to pineal gland in the brain, whose inexactly discernible form reminded 17th-century anatomists of a pine cone ('Zirbel' in certain German dialects). Particularly important for the establishment of the anatomical significance and function of this gland were the theories of René Descartes (1596-1650), who localised in it the main centre of 'seeing', and went on to say: 'There is a small gland in the brain in which the soul performs its function in a more special manner than in every other part of the body.' This was understood to mean that Descartes had identified this small organ as the 'seat of the human soul'. Krebber states that 'Descartes's sharp dualism of physical and spiritual substance found its neurological crux here'. And he continues: 'This may seem to us today to be a historical anatomical ascription that has long become outdated. But it permits a humorous perspective on our contemporary rationalism. Black, semi-abstract, fissured and heavy, Zirbel lies upon the lawn ... The title mockingly suggests ... that pure thought may be present here ... But Zirbel is not a sublime example of rationalist benevolence. On the contrary, we see a heavy, curved, organically distended giant raisin funnelling into itself.' This description by the artist himself ideally summarises the background to Zirbel in all its complexity, contradictoriness, discrepancies, dissonances, clarity and ambivalence. 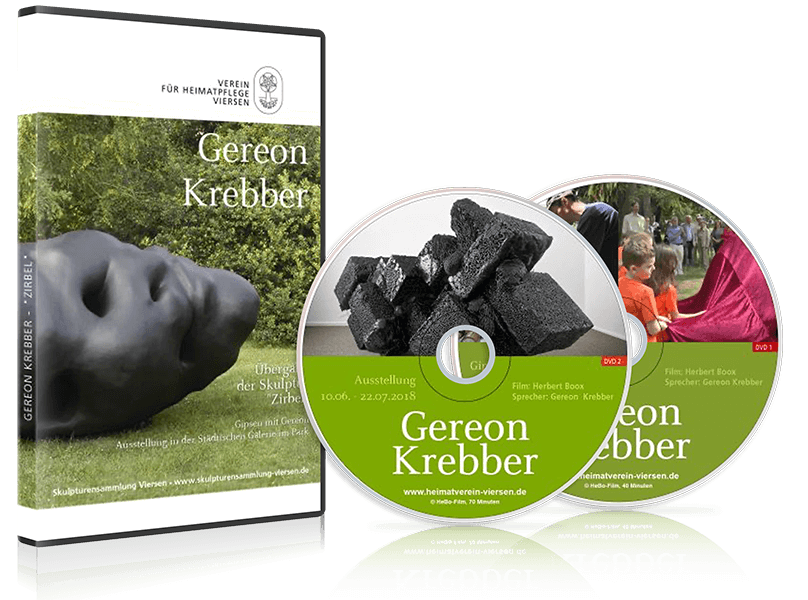 Delivery of the plastic; Plastering with Gereon and exhibition from 10.06. - 22.07.2018
2 DVD`s by Herbert Boox
Total playing time 110 minutes
Speaker: Gereon Krebber
Sales price of the DVD box: 15 €
available in the webshopbuy now 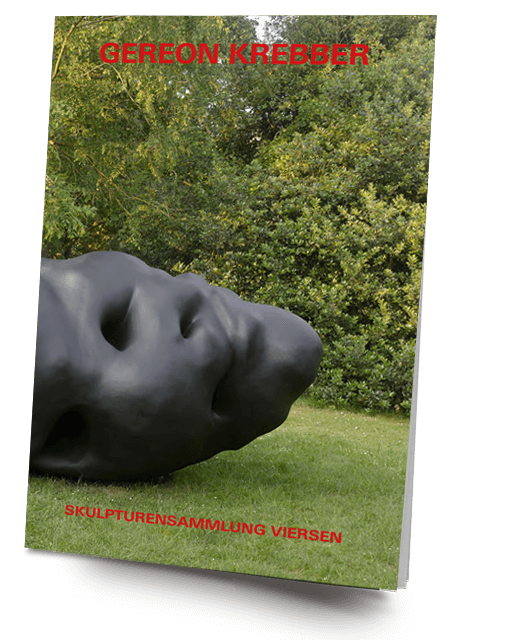 Gereon Krebber - Zirbel
in the "Sculpture Collection Viersen"
In German and English With the inventory catalog of the sculpture collection at the time of publication.
Viersen 2018
Selling price: 10 €
ISBN 978-3-9818417-3-2
available in the webshopbuy now 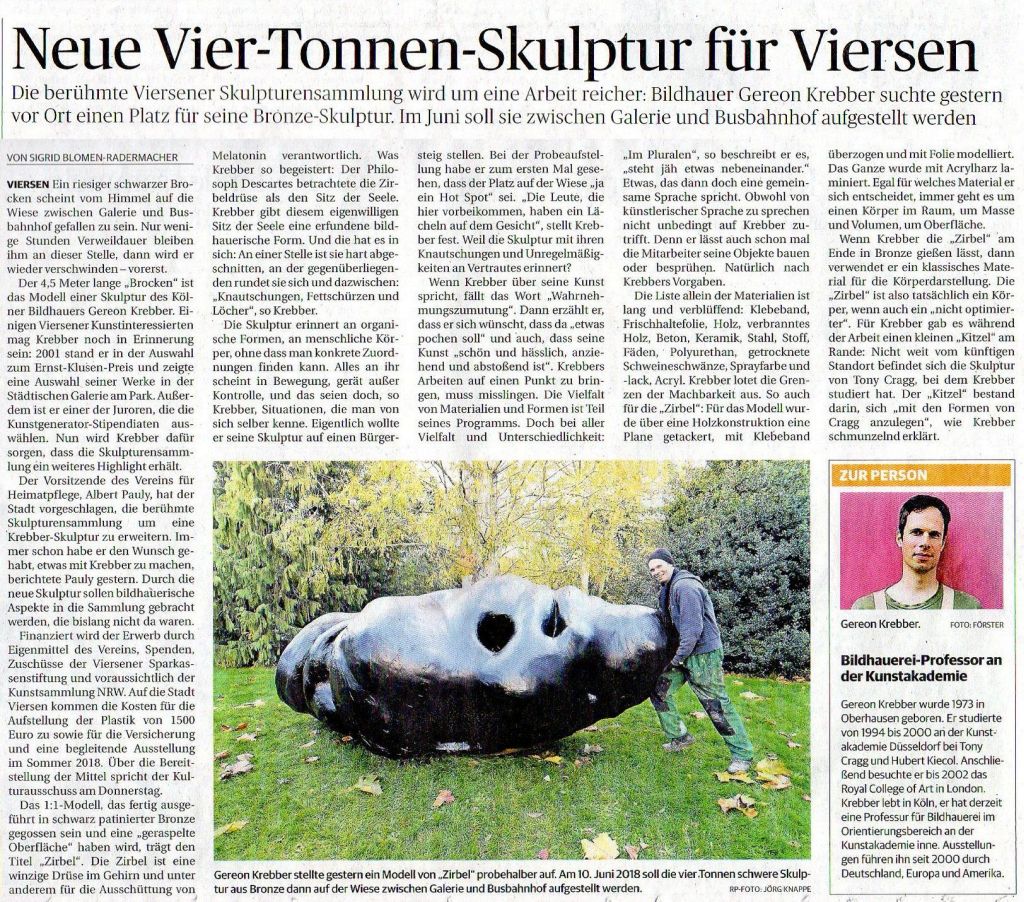 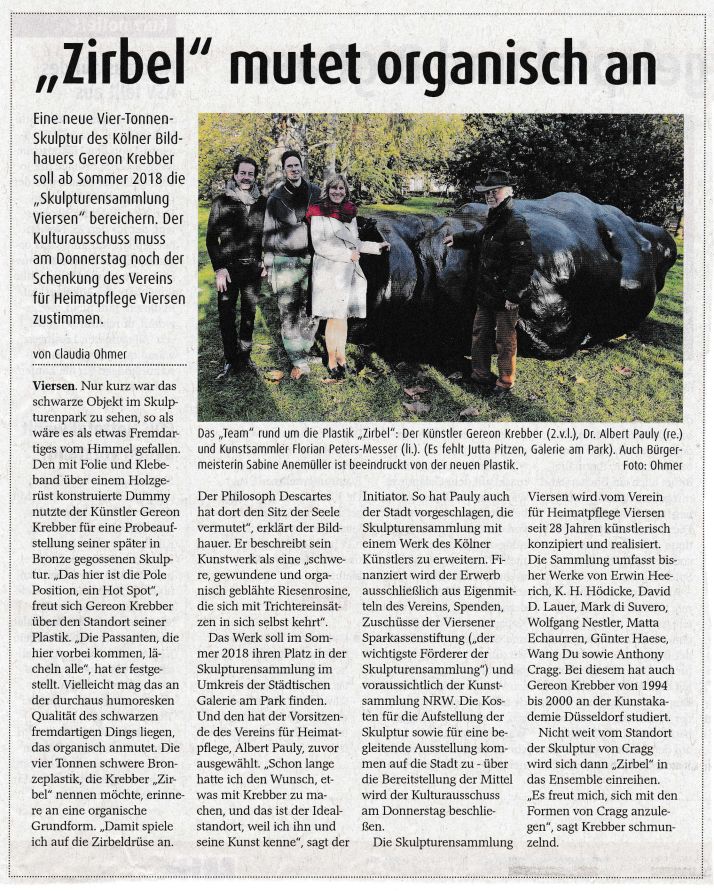 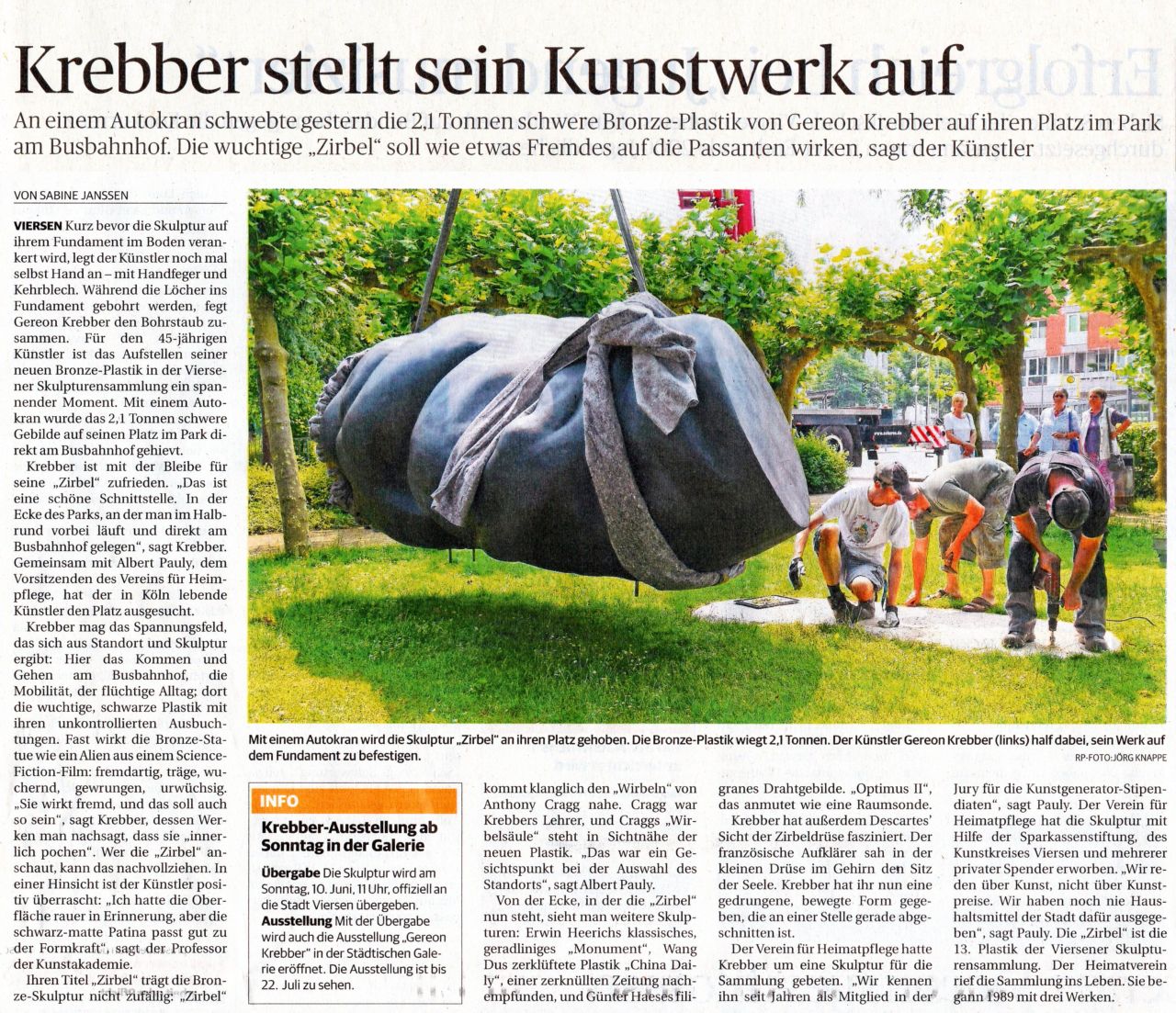 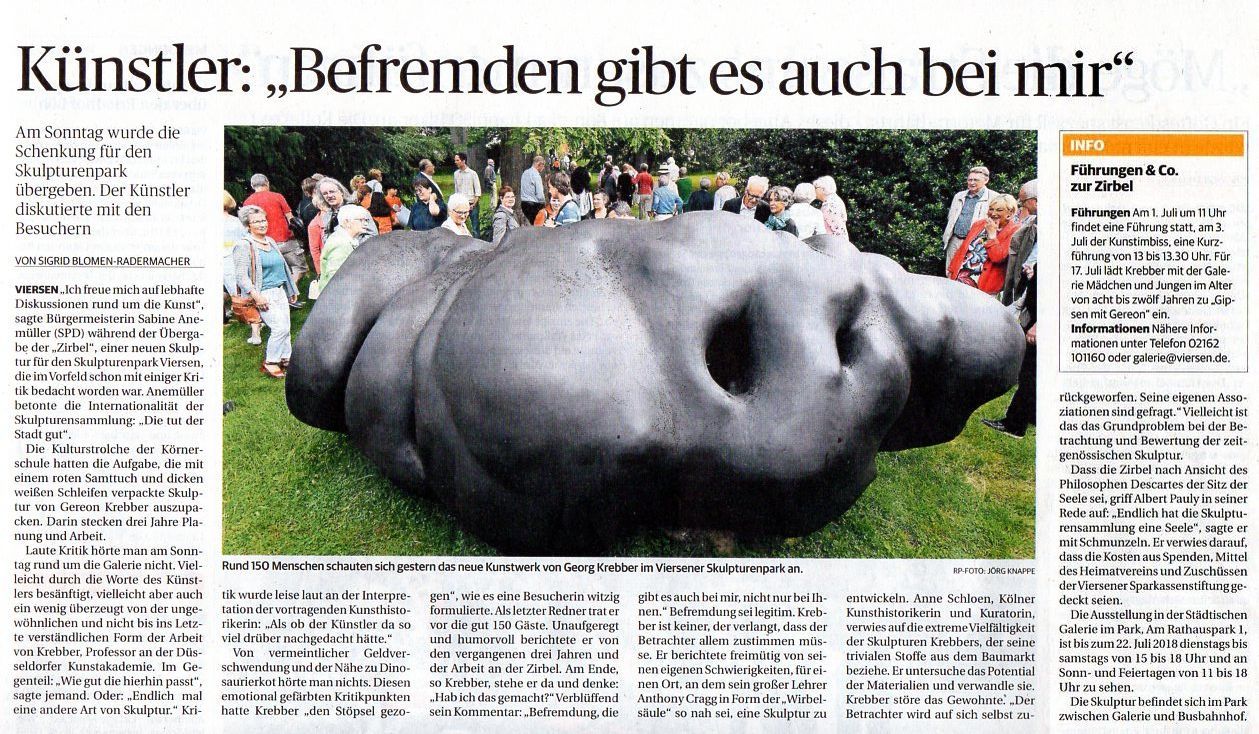