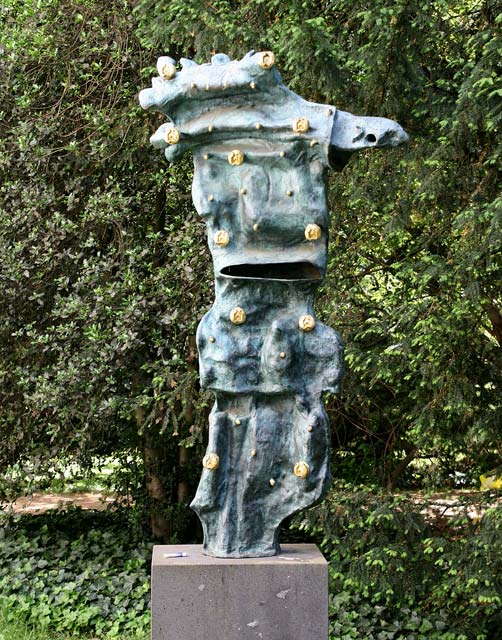 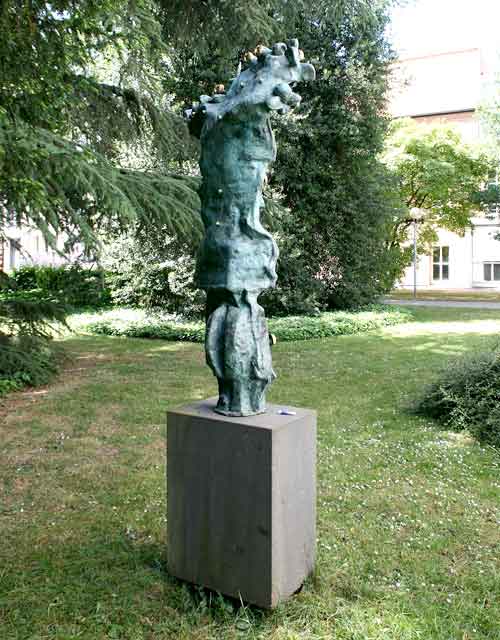 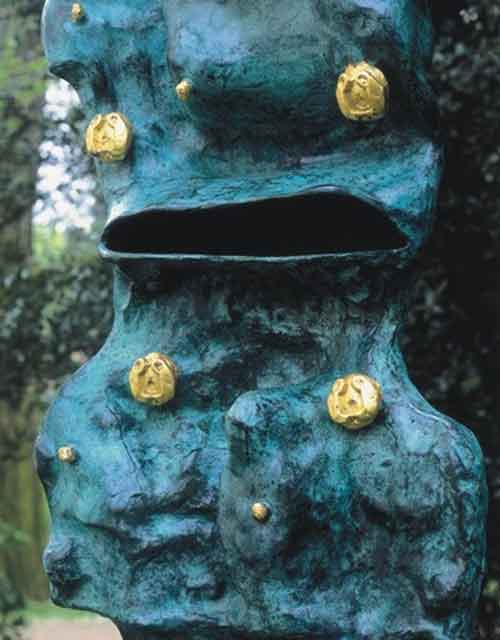 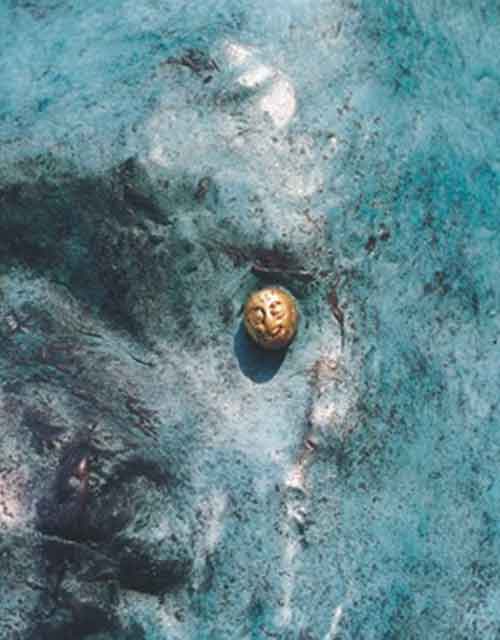 It was as early in the thirties of the last century that Matta made a point of establishing his creative ego in structures of architectural thinking and imagination and unanimously emphasizing his creative self in contradictory functional positions. In pursuing this aim he found himself getting away from traditional concepts of established perspectives of volume, restricted functional forms of physical performance, thus looking for and finding his way to the permanent process of motion, changing forms of the body and unforeseeable artistic structures.

It is in his drawings and paintings that Matta succeeds in transforming items of corporeal existence and expanse or rather phenomena of volume into a continuous change of momentary items of transition. In this way the pictorial concept is transformed into a galaxy, an orbit of most differentiated transitory phenomena.

In the course of many decades it was the visionary character of Matta's space pictures that seems to have been generally accepted by conscientious contemporaries, if it is true that Matta is supposed to be "the painter of the star wars" (W.Schmied, 1981).

Matta as a sculptor and, respectively, a producer of plastic art has not got these possibilities. On the contrary, in this sector he appears to have been shown his limits. Any phenomenon in the plastic arts remains a piece of genuine reality within the dimensions of space, and its singularity is basically different from all the painted objects in their rich world of visual phenomena because of its singularity and essential unity, by its gravity and its restricted physical dimensions.

It seems that the title expresses some sort of provocative antithesis: CHAOSMOS, linking up two opposing ideas within the perspectives of abstract thinking, namely "chaos", meaning disorder and total lack of structure, and "cosmos", meaning order and solid structure, the universe as an orderly system, both concepts being playfully and surprisingly amalgamated as a matter of course. Universal chaos and universal order are meant to be reciprocally expressed in this sculpture. And even more: It is here that the rational principle of creating a synthesis of antithetical phenomena coincides with the pleasure that the surrealists have always taken in things happening by chance, thus giving pure chance the possibility of bringing out a surprising amalgamation of arbitrary and alien entities, an amalgamation that shows a tendency towards overflowing extravagance. As far as paintings are concerned this tendency may easily be complied with. In his sculptures, however, Matta has to confine himself intelligently in order to achieve comparable forms of expression.

The life- morphology of CHAOSMOS presents the viewer with a peculiar shape of polyp-like physical existence, the obvious hollowness of which forms a clear contrast to the rich variety of its surface.

It seems, indeed, that this sculpture consists of wall-like structures only, softly welling up in changing intervals, leaving a deep impression on the minds of the viewers by their openness and the lack thereof. Without any perseverance and with occasional focal points only, the outward structure of CHAOSMOS is being integrated into a big general flux. On the varying surface of the sculpture small spherical "parasites " are sitting haphazardly, as it were, being scattered all over it on the protruding parts of the sculptural forms, glimmering gold-coloured and looking at us as creatures with big faces. Compared with the big sculpture as a whole they appear to be much more concrete in shape and the way they look. They have been submitted to ornamental simplicity and to functionalism, their shape and expression being comparable so to speak with little leeches on a man's broad muscular back.

As a matter of fact this polyp-like sculpture bears human features, it has got an oversized face with a tremendously broad mouth above a tiny chest and yet smaller degenerated legs. This sculpture is lacking the characteristic features of the human body, it has no physical independence, no symmetrical form, structure, and proportion. It seems to be by accident yet with great emphasis that the very intensive "facial expression" has been given anthropomorphic features.

The sculptural combination of the different appearances of the human body remind the viewer of those senile faces of children in the pre-Columbian Olmec culture. The senile baby or the old man with the baby face are beyond the natural lapse of time and give way to the idea of the simultaneousness of passing away and being born. CHAOSMOS should be taken as a form of creation in a transitory sense. Not only does its generative element lie in the coming together of different bodies, but in the idea of the body as such with all its varying elements of a picture in the process of being created, a picture showing in an essential way both development and completed form.

The Viersen Collection of Sculptures has not presented any such generative peace of art so far. Technical aspects have been predominant here within the spectrum of architectural phenomena, of structure and balance and their significance in the process of arriving at sculptural decisions. Even the liquid forms of K.H.Hödicke's sculptures are based on the classic motive of the statue and its elementally physical structure.

Matta's CHAOSMOS adds a morphological element of life to the collection, thus making the conditions of plastic arts a completely new topic. Corporal existence is being looked upon as a generative process. It is this new concept which the viewer becomes aware of, he realizes that sculptural imagination has something in common with the process of cell division, pointing rather at the genesis of cells, limbs and bodily forms than their final and irrevocable shapes. Nothing is definite here, nor is it the idea of "expression", the unspoilt quality of which is lying in the bio-morphological process of corporal formation in the proceedings of life that are both different from each other and crossing each other's ways in their development. They occur beyond or rather before the definite separation and differentiation that may be function and cause, the result or rather the consequence of various forms of action that can be differentiated, either inwardly or outwardly, in a symmetrical or constructive sense. In this respect the possibility of creating structural order is still part of an initial genesis developing from the nucleus so to speak.

This sculpture could be given twenty years of maturing until, at the beginning of the nineteen-nineties, it was finally cast in bronze. It is fascinating to see how Matta, the grand old man of surrealistic art, succeeds in finding a generative element in sculptural concepts that are completely new. He does so by dodging the dominating artistic rules of contemporary sculpture. CHAOSMOS will enrich the Viersen Sculpture Collection with an essential and genuine element of sculptural arts.

Group photo on the occasion of an exhibition in the Pierre Matisse Gallery, March 1942.

Biography and artistic career
11.11.1911
Born in Santiago de Chile.
His parents are of Spanish-French-Basque descent. Matta is educated in a Jesuit school and then studies architecture at the Catholic University of Santiago

Diploma with the utopian architectural project "League of Religions"

Travels to Berlin (Olympic Games), Helsinki, Brussels, Barcelona, London and Stockholm. There, at the end of the year, the imaginary film script "The Earth is Human" will be created in a hotel in 162 scenes. Contact Garcia Lorca in Madrid.

Paris. Work on the Spanish Pavilion of the World's Fair. Meeting with Pablo Picasso, Salvador Dali and Andre Breton. Admission to the group of surrealists. Exhibition of drawings

Emigration to the USA together with Yves Tanguy

Close contact, among others with the artists J. Pollock, A. Gorky, W. Baziotes. Exhibitions in the Pierre Matisse Gallery, New York

Return to Europe. Stay in Rome and since 1954 back in Paris

Participation in the 3rd Biennale in Sao Paulo

Mural for the Unesco building in Paris. Start of a series of exhibitions at the Galerie du Dragon

First retrospective at the Museum of Modern Art, New York, under the direction of William S. Rubin. Exhibition of sculptures in the Pierre Matisse Gallery, New York

First solo exhibition in Germany. Participation in the II. Documenta in Kassel. First retrospective in Europe at Moderna Museet, Stockholm

Matta chooses Tarquinia in Italy as an additional place to live and work.

Manifestations against the Vietnam War. Work with art students from the University of Havana, Cuba

Retrospective in the National Gallery in Berlin. Travel to Africa and Chile. Meeting with Fidel Castro

Participation in the major exhibitions "A New Spirit in Painting", London and MParis-Paris ", Paris

Matta becomes a permanent member of the board of the "Congress for the Cultural Autonomy of Our America" in Managua. Reinhard Onnasch organizes a Matta exhibition in Berlin.

Large retrospective at the Center Pompidou in Paris

Retrospective in the Palazzo Venezia, Rome. Exhibition of drawings in the Museum Bochum

309 / 5000 Übersetzungsergebnisse On the occasion of the large exhibition of the art gallery of the Hypo-Kulturstiftung München and the Kunstkreis Wien, an extensive monograph is published, ed. and introduced by Wieland Schmied, with texts by Rene Magritte, Gordon Onslow Ford, Max Ernst, Andre Breton, Marcel Duchamp, Henri Michaux and Octavio Paz.

Exhibition at the Yokohama Museum of Art, Japan 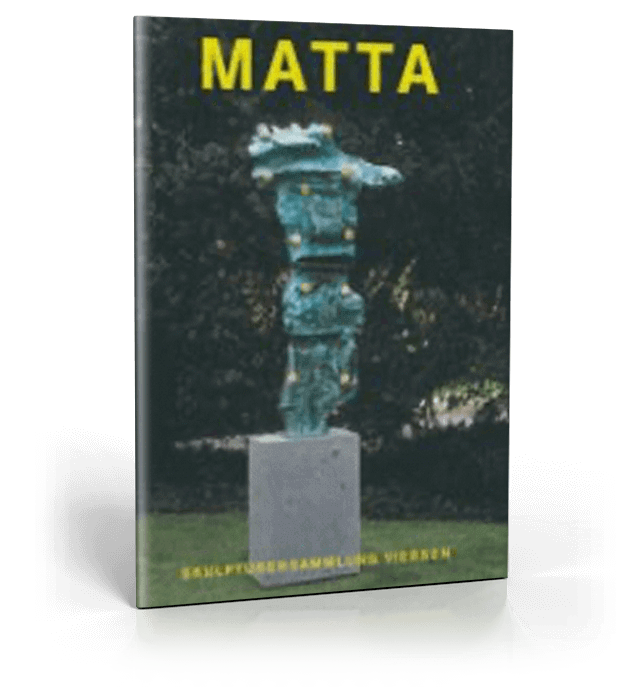 Chaosmos
In German and English
With the inventory catalog of the sculpture collection at the time of publication.
Viersen 2002
Selling price: 10 €
ISBN 3-9805339-5-9
available in the webshopbuy now 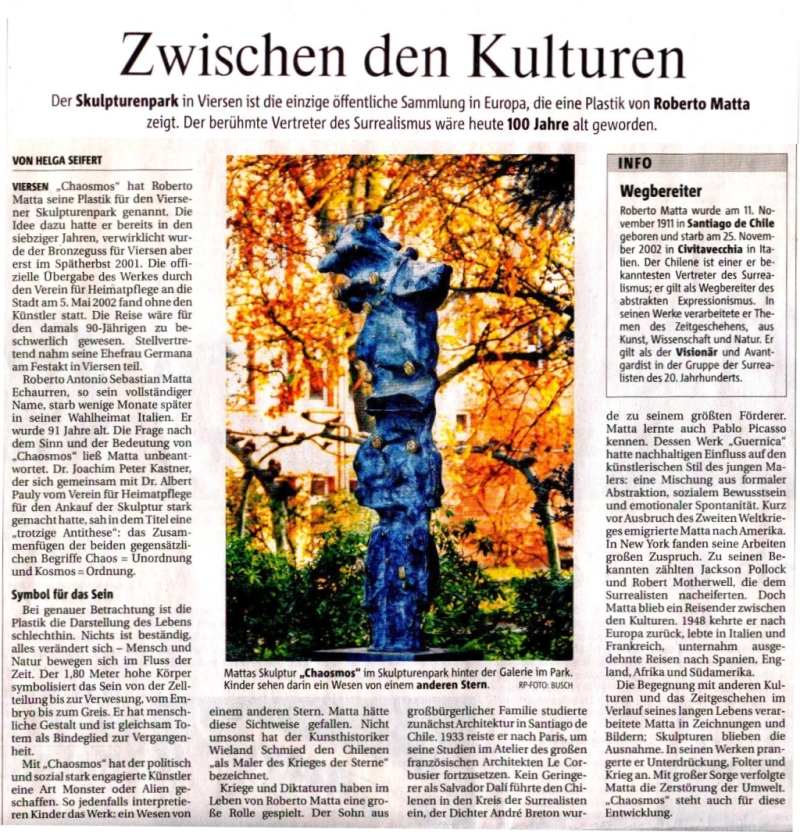