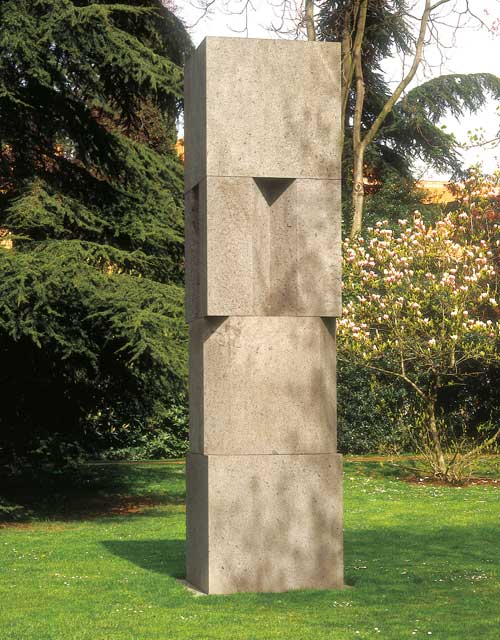 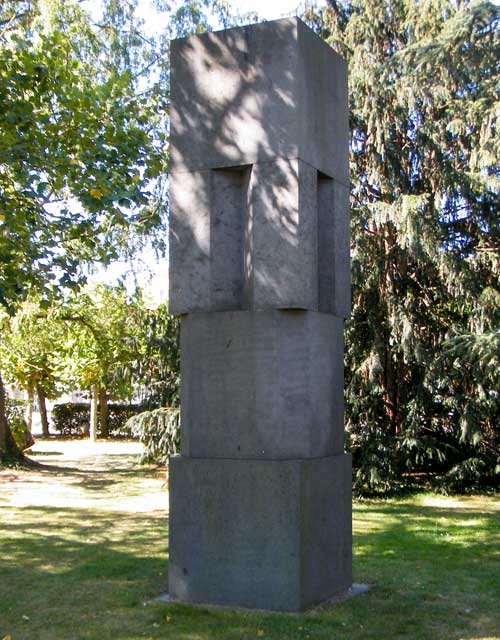 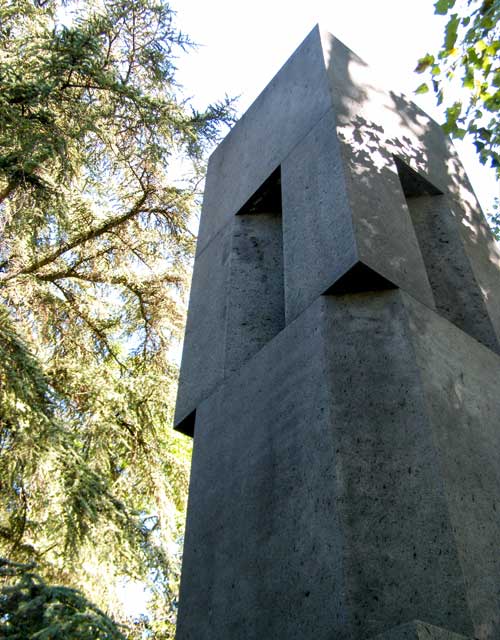 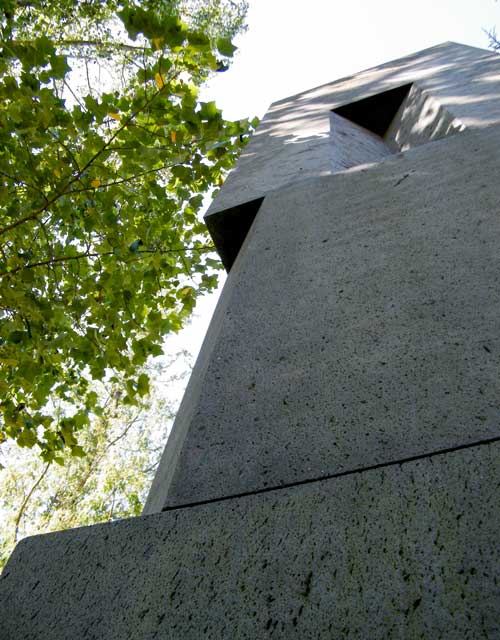 The sculpture designed by the artist Erwin Heerich from Düsseldorf was erected in the park adjoining the Municipal Gallery in Viersen. Rising to a height of 4,80 m, it is composed of four stone blocks which are each other and firmly joined together is such as to make sure that their individual bodies are still apparent .The joint lines between them were spaced out by lead-base bearings .The accurate cube shapes of the lower and upper block are left untouched whereas both middle blocks show sculptural marks of regular and meticulous finish.The lower middle block has identical cuts at its edges so that it becomes a body of eight faces. The upper middle block shows a division of each of its four faces into three regular parts which is brought about by an acutely pointed groove cut into them.Two phases of building this monument may be noticed: first the making of the exact bodies, then the execution of the sculptural marks on the basic bodies of both the upper and lower middle blocks only. In the lower second part these marks enhance the effect of condensation and contraction into the solidness of a column while, at the same time, drawing a perfect analogy to the natural "faceting" of lava rock. The grooves in the third basic body give the impression of dividing or of potentially dismantling the block. The front view of one face of the stele shows the relation in measurement between the cuts in the blocks. They divide the entire width of 120 cm into equal parts of 20 cm so that in each face there are three divisions opposite each other.

The change of the faces is particularly striking and eye-catching when you walk around the "stele", especially as the alternating impression of dilation and contraction conveyed by two middle pieces seem to create some sort of additional movement. The segmentation carried out on both the middle blocks evokes the association of a triglyph in Greek temples of the Doric order. However, by dividing the acts of segmentation into two planes and two pieces Erwin Heerich succeeds in developing a dialogue which determines and brings to life the sculpture in its entirety. Erwin Heerich's sculpture cannot be called a "stele" in the proper sense of the word. It is rather a "building", but one that invites you only to contemplate its outer forms, not to step in. Amongst his complete works this construction from Viersen is one of the monumental sculptures whose character agrees quite well with the fictitious architecture of other works of plastic art in this field, such as the sculpture in Lanz Park or the great "Gate" of basalt lava erected in the South Park of Düsseldorf. The architectural as well as the sculptural essence are closely linked in Erwin Heerich's work; here in the park in Viersen they both enter into an open and spontaneous dialogue with nature. When the citizens of Viersen suggested that it might be nice to have a bird's watering place in the little park, Erwin Heerich welcomed this idea and created another sculpture.

Studied at the Art Academy in Düsseldorf with Prof. Ewald Mataré

Prof. at the art academy Düsseldorf

Member of the Berlin-Brandenburg Academy of the Arts. 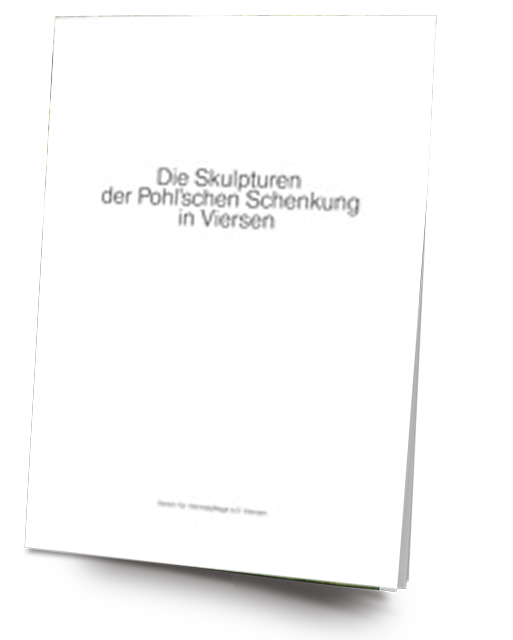 Erwin Heerich - Monument
David D. Lauer - Figur
K. H. Hödicke - Kaspar
In German and English. For the installation of the sculptures and their handover to the city of Viersen in September 1989.
Selling price: 2,50 €
available in the webshopbuy now